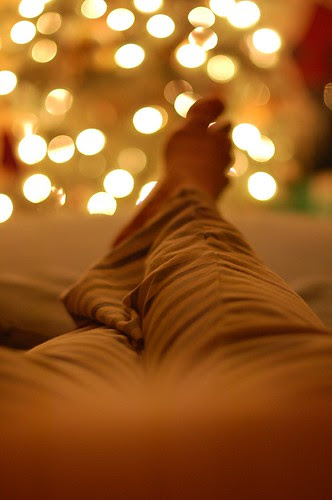 and thought. without doing much of anything else.
(at least until i saw the belly amidst twinkling lights and decided that it needed to be recorded with the camera.)

and it's not so far away.
the midwife told me on monday ... super secret ... but in a week and a half ... they wouldn't stop labor from moving forward. (she also noted that pregnancy could also go for another 8 weeks or so ... but ... i chose not to listen very well to that statement ... and i suggest highly that you don't either.)


and i'm feeling confident.
about labor.
about bringing a baby home.
about being the rock that my girls need me to be as they adjust into their new roles of biggEST sister and bigger sister.
about working.
about raising 3 children with an amazing husband that is gone way too often.
about who i'm becoming.

and my single resolution for the year is to harbor this confidence that i feel right now as i lie in front of twinkling lights and feel this baby moving around and hear my girly-girls asleep in their bed.

here's to hoping that you are sharing in this confidence as you venture into your 2010 as well.
happy new years to all of you out there.
thanks for helping me along the way.
Posted by jen at 5:01 AM

I love that photo! Here's to hoping 2010 is everything we hope it will be!

Aww, that's a great shot! It's scary to bring home a second baby, let alone a third but you rock motherhood and you're going to be great as a mother of three.

I'm going to aim for the same confidence, though adjusted slightly since we're in the same boat. Well... I'm not pregnant, but you know what I mean.

love the shot. and love the new perspective!

What a great resolution and beautiful photo. Happy New year!