love this photo from my sister's session that we did for her housewarming invitations.

it was almost exactly as i had envisioned during my planning.  except for the fact that my little pup niece, talullah, wouldn't sit still ...

can't really blame her ... she was only a few weeks old and just over a pound! 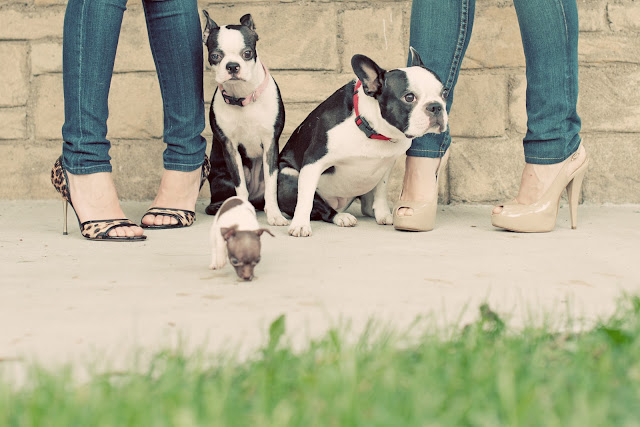 linking up to i {heart} faces ... this week it's all about animals!

in which I realize that i'm absolutely terrified of mice ...

& that my husband doesn't really care.

& then, the husband that pretty much has no hearing left after being bombarded by airplane noise day after day ... said, "what's that noise?" ...

& then you know that screeching record sound?
& the feeling of every hair on your body standing tall?
& your heart speeding into overdrive?

let me preface this story by telling you about a "mouse" in my house years ago.

I was all, "oh, what's that on my floor?" & i bent closer down until my nose was practically touching the floor ... and just as i was about to reach out and touch it because i was unaware of what that THING was ... i noticed that it was a nose with whiskers. attached to a skull & a spine.
like some freaky cartoon where a kitty pulls a mousey appetizer through it's teeth.

I promptly grabbed the closest tupperware. slammed it over the top of the "mouse". put a gigantasaurus dictionary on top. & called my dad. to come and help me.  and then i pretty much sat in the corner rocking.

so, this. tonight? it's a big problem. it's alive. it squeaks & it's in my bathroom.

heart racing, palms sweating ... I kind of (not really) casually ask jeremy if he's gonna go get it. to which he responds, "i don't see you jumping out of the bed to get it *harry houdini."

but he didn't really say harry houdini ... I think he said some track & field athlete. but I don't really know because i'm not a track & field fan ...
& because i was FUCKING SCARED out of my mind.

so he got out of bed. (finally) & so did I (to show camaraderie). and I stood on the step we have for my bed. but then I couldn't get off the step because I was freaking out. and I really wished that I slept in socks because apparently socks give you courage when dealing with mice. but my socks were across the room in the drawer, so no luck there.

jeremy went in search of ... something. & he was gone for a really really long time.

& then he came back and asked if I'd found something to catch it with. but I pretty much hadn't moved, so he just got pissy at me and left again.

he left me standing on my poor pathetic little step wishing for socks.

and made a plan.

my plan was that if it came running at me, i would either jump onto the fan and hang from the ceiling
or
i would sail through the air, over the mouse, run into finn's room grab him. take him into the girl's room. stuff dirty clothes into the space between the door and the floor. and hide out there until the mouse was gone or died of old age.

i'm just gonna come out & say it. i really don't love mice and they can die if they live in my house.
i think i would much prefer to have the littles living in my walls.

wait. maybe I should rethink that statement.
because even though the littles are cool & resourceful & stuff, it might not be awesome having a crapload of little people living in your walls.


plus also? I don't have any thread spools and thimbles lying around, so they'd have to use those little plastic pizza box things for tables and legos for chairs, which wouldn't be as homey.  and probably uncomfortable.
but i think they were pretty much made up ... so i don't have to worry about that right now.
oh crap.  finn whimpered. and i pretty much couldn't move. so i willed him back to sleep. with my mind.  it worked.  whew.

and then i secretly prayed that the mouse wasn't gnawing on his sweet little baby face.

jeremy came back, finally, empty handed. again. and I reminded him about the puke bucket in the cupboard that he could use to capture the mouse and he asked how he would pick it up and I said
"slide a freaking piece of paper or cardboard or something underneath!"
thinking, "i'll gladly find cardboard, if you would just cover up the mouse, first ... so that I can move."

but instead, he rushes off to find cardboard ...
but not before seeing the mouse & exclaiming, "oh that's a big one"

new plan.
if it comes at me ... i'm running out the back door & moving to a new house with 3 bathrooms and 42 cats.  so that at any given moment there will be at least one bathroom without a mouse living in it.

i watched the doors.

husband came back with cardboard. grabs the puke bucket.
and can't freaking find the mouse.
so i offer suggestions.
to which he responds, "i don't really want to hear anything from you."

because apparently ... he forgot that men are supposed to always save their wives from scary mice.  i swear, don't you have to pass that test in boy school before you are allowed to become a man?  i thought there was a whole chapter titled "Saving Your Wife From Creatures".  and included tips for keeping mice, snakes, axe murderers and spiders away from your wife.

and maybe also includes a blurb about NOT GETTING PISSY AT YOUR WIFE WHEN SHE IS SCARED OF SAID CREATURE/S.

currently, i've made it to finn's room. i'm vowing never to sleep again & i'm never using the bathroom again.
and i totally, of course, have to pee.
edited to add ...
ok.  fine.  maybe he does love me ... because when i woke up ... i asked him to come and help me pee.  and first he said no.  but then he went and turned on all the lights and then peed first to make sure that it wasn't hiding in the toilet.  he didn't hold my hand while i peed, holding a broom and standing watch over me ... like i would have preferred ... but i think maybe he does care ... a little bit.
Posted by jen at 9:12 AM 5 comments: