because i can. {an *i heart faces* challenge}

after being so caught up in this and that and the other thing ... i've missed just sharing a simple photo in the i {heart} faces challenges.

with the craziness involved in the end-of-school-year business ... i just couldn't get anything in on time ... and then this week popped up ...

and i immediately thought back to a photo i captured of stellers.  dancing.  quite possibly one of my most favorite photos of her ever.  (do i always say that?) she was just her.  involved in a moment of spinning across a beach.  sand sprinkled across her heels.  eyes closed.  dancing.  her blonde hair blowing in the breeze.  lost.  in that moment.

stella is such a funny girl.

but occasionally we get a sublime glimpse of a girl in love with life.  a dreamer.

in all her whimsy.

thanks, i {heart} faces for being there ... even when i haven't been.  i always click on over to see what you are up to ... and it's nice to join in once again.

you should click on over too ... see what other whimsical photos you can discover.
Posted by jen at 12:01 AM 9 comments:

sometimes ... there is just so much in here.  in my head.  and i want to write lovely little notes and tell you about things and tippitytap my fingers across the letters.

in my head.  in my bed.  late at night.  when the world is sleeping and i should be too ... but i'm not.  because my head is thinking and exploding with thoughts and ideas and this and that.

things that i really want to tell you about ... but can't necessarily take the time to write.  and so i think them.

i think about telling you about how stella is finally riding a bike.  like really riding it ... well enough to go on long bike rides with us.  and about how on those long bike rides i find pretty things like fields full of wild grasses (perfect photo location) and patches of stones ... rocks ... and little teeny tiny baby agates.

and i want to tell you about how finn is so cute now ... because whenever you say a person's name in that way that you would when you are calling for them from across the house or under a blanket hiding ... he answers back with "a--youuuu?" and it's adorable and sweet.  and how he is amazingly this little boy.  and i'm kind of liking trucks and tractors and busses and wheels and the noises that everything makes.  even though i never thought i would.

i want to tell you about how hard it is with three.  and how i never thought i would have three.  and how lucky i am to have three.  but that sometimes it's just really hard and confusing and difficult and occasionally i just cannot wait for seven o clock to come ... because that means that i will be ushering them towards bedtimes in the not too distant future.

i want to tell you about cora ... and how crazily crazy and loud and obnoxious she is in this so adorable way.  and how she mentioned to me the other day, as we rode off to a doctor's appt the other day (fearful that she had ringworm because someone told me that ... but didn't.  thankfully.  just a funny little something or other.  it's gone now.) and we were alone and she said ... "so.  it's just you and me.  that's special."  and it was.  because it's rarely just her and i.  and i'm trying to fix that.  i can't imagine being the middle.  kind of lost but at the same time ... really important being both a big and a little sibling.  and hard.

and my life isn't all hard.  it's beautiful and it's lovely.  and i'm getting to do things that i love.  like take pictures of people.  and it's amazing because it uses all of me.  it uses the smiling social me and the creative me knocking at the door.  together.  and it's fun.  plus ... also? babies.

and sometimes i'm sorry that i don't just stop by to tell you those things.  i'm sorry that sometimes i can't just put these thoughts into a neat little package ... tied together with a giveaway or a life lesson or an ending.

and so i sometimes just don't.

and i realized all of that tonight while tweeting with a friend.  who feels many of those same things.  and i had challenged us to write for 10 minutes.  just 10 minutes.  words.

i said yes.
as soon as finners wakes up from his nap ... we'll go to the park.
and we did. 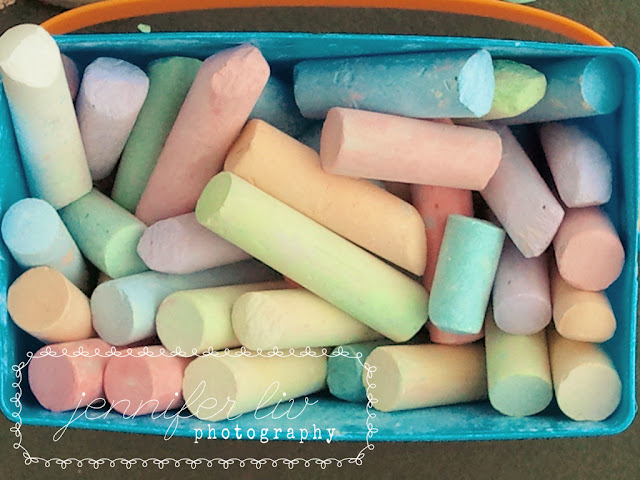 we brought the chalk ... and the wagon. 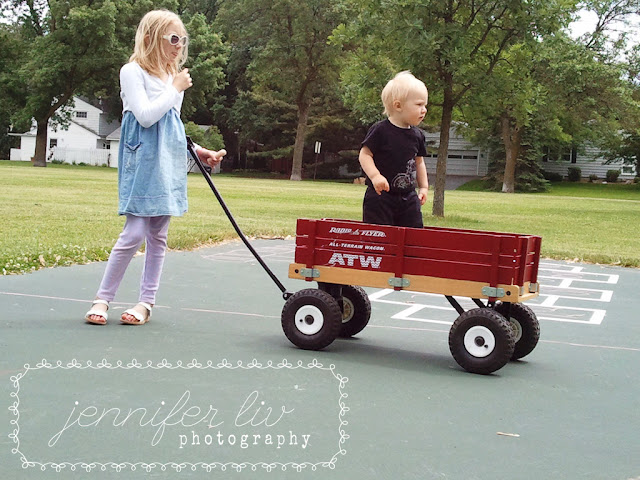 we split up at the corner of the park ... stella scootered one way.  i pulled finners in the wagon the other way.  and cora took off lickitysplit running from where we stood kitty corner from the park.

it was an experiment ... to see who could get there the fastest.  it was so not a race ... i had to convince them of that after stella and i made it to the park minutes after cora was already playing on the slides.  although next time ... there will have to be a hypothesis made BEFORE the experiment.  and the result will have to be that stella will get there first ... because hello?  fair. 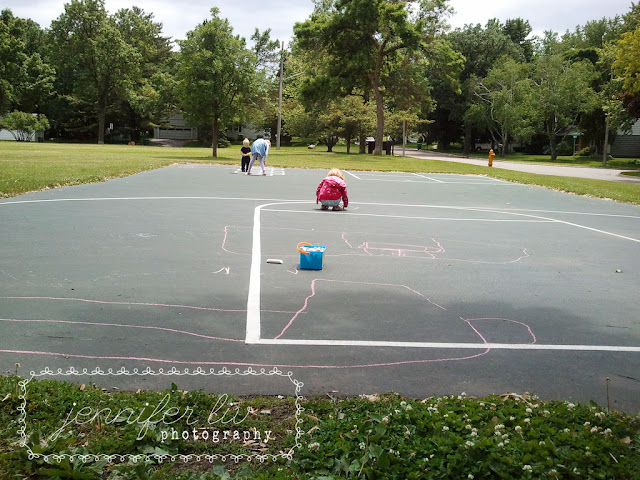 my three babies ... my soft landing ... building a chalk house on the basketball court.
*note.  we are standing just behind the couch. 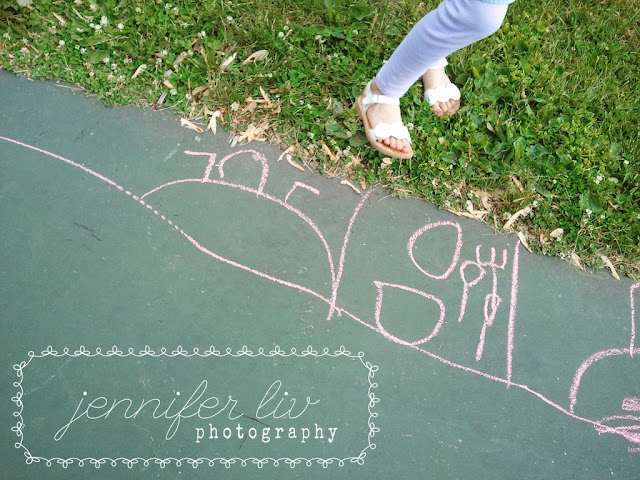 we drew our entire house ...
complete with a kitchen sink, silverware and dishes.

we encouraged each other to try drawing new things.  to do something different.
and we did. 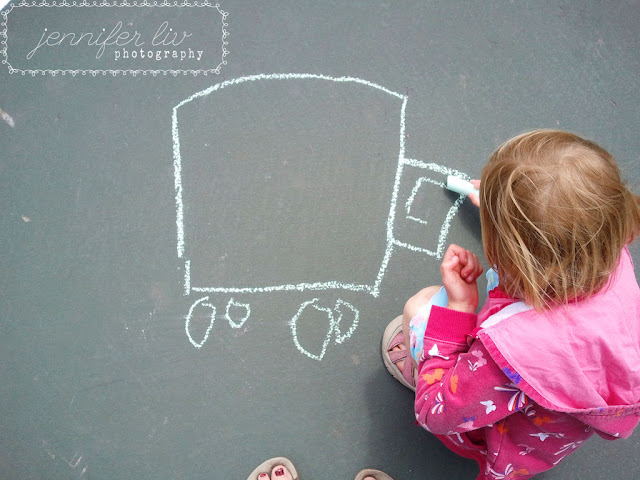 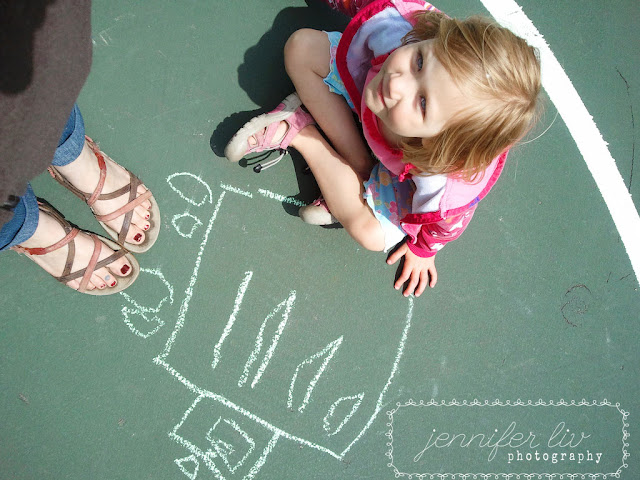 finners attempted some chalk drawing too.
he managed to draw all over himself.
but honestly i took the picture because ... i just don't want to ever forget these pudgy little hands and how they hold a piece of chalk. 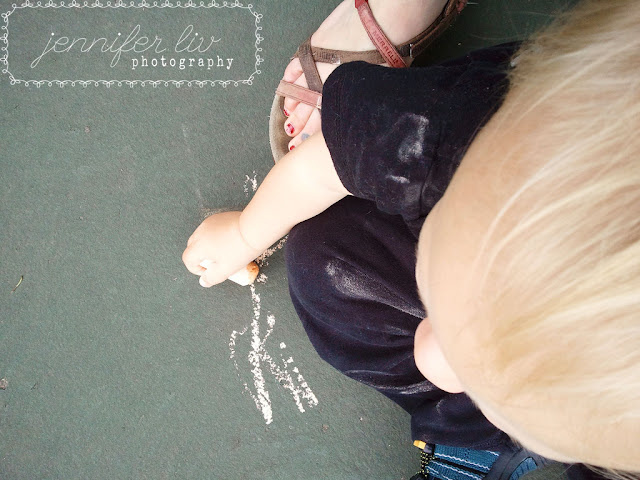 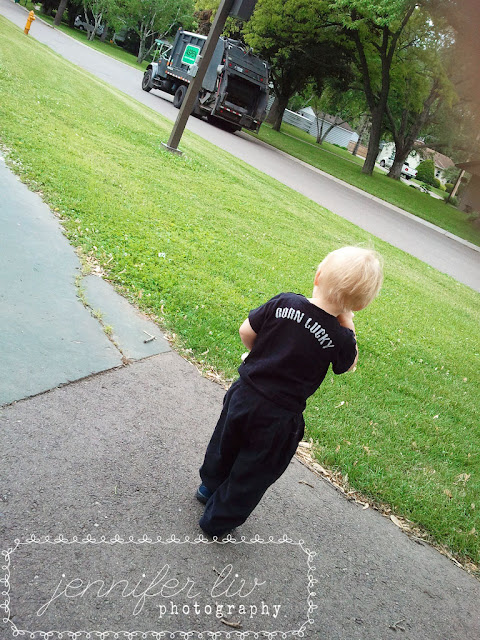 i also just noticed that he kinda looks like a techie from backstage during the high school musical production of oklahoma.
but shorter. 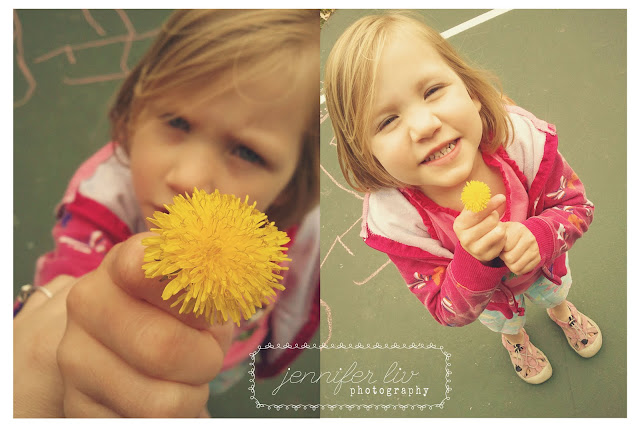 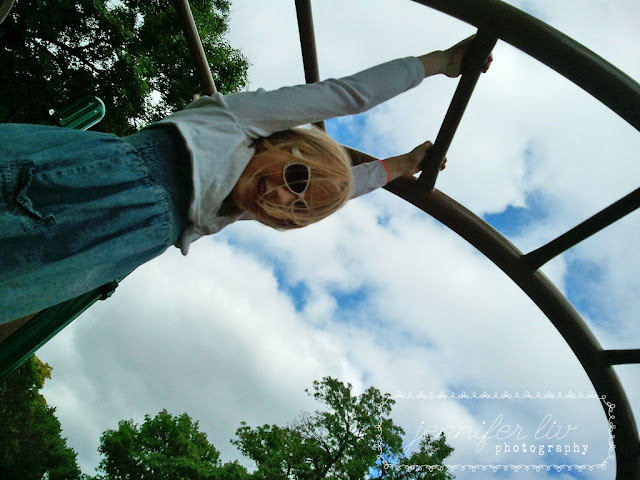 we hung around.
i (kinda successfully) managed to get all three kids into the same picture. 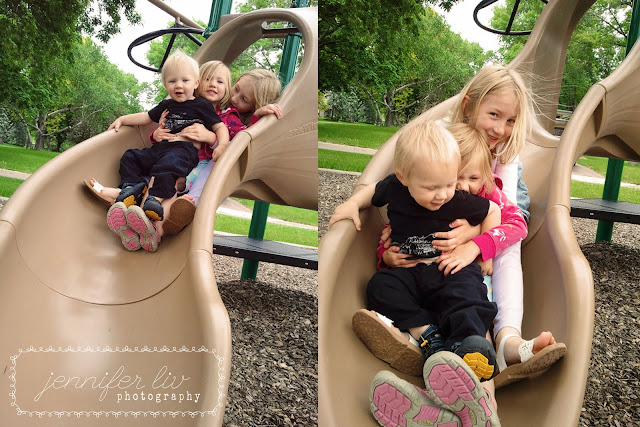 hard to walk away.

i (almost) made it out of the building without shedding a tear.

one of my students and her mom ... that i will forever love ... thanked me for what i had done for her daughter ... though it feels like so little ... compared to what she has done for me.  she started the pangs of missing her already.

i said goodbye ... to so many from this building that i have grown to love ... knowing that i will continue to see them as a parent ... but i won't be coming back as a teacher there.  and that made my heart hurt.

i closed the door to my office.  i probably will miss the skylight ... a little.

and then i said goodbye to stella's teacher ... and i lost it.
totally and completely lost. it.
maybe it's because of my comfort level with her ... or the fact that she probably knows more about me than anyone ... thank you stella.  or that she's pregnant and her hormones were making me wacky.  i don't know.

what i do know ... is .. i'm a blubbering fool when it comes to goodbyes and changes and transition in general.  like everyone ... i like to know what is around the corner.  i like to know who i'm going to run into.  i like to feel safe and comfortable and happy.

i'm venturing into the unknown of a new position.  a new school (or three).  a new place for me.
... something entirely different than what has been done before ... and it's good.  right?

so, with tears in my eyes ... i stepped out of the unknown ... and into something entirely new.

and i'm going to be ok with that. 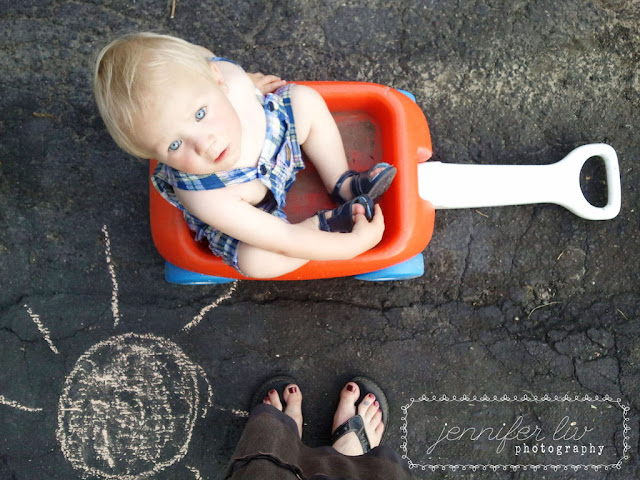 but i also do know that i'm so super wonderfully grateful that i have my three babies to love on all summer long.

in the wise words of a friend that is retiring this year ... it's going to make for a softer landing.
Posted by jen at 3:20 PM 2 comments: