apparently someone in texas has too much time on their hands ...

So far ... this is the wackiest holiday letter we have received this year.  apparently ... "big news" in our area a few weeks ago surrounded an episode that occurred when a certain somebody came to town to sign books.

and there was another certain someone that decided they didn't like that first certain someone and threw tomatoes at her.  i guess they missed.  (honestly ... i didn't know that until i read this letter.)

and that person just so happens to have the same name as my husband.  which is a very common name in this scandinavian area of the frozen north ...

but it so wasn't him.  he was working ... and i guess above and beyond that ... he would never have thrown tomatoes at someone.  he's much more of the debating type.

but ... irregardless ... he received this letter in the mail.
and i haven't decided if it's wackier that this person would have sent it to EVERY person with that name in the surrounding area ... or if they only sent it to my husband and thought that they must have gotten the right guy on the first try.

by the way ... i've tried my best to protect your virgin eyes from the vulgar words that were contained within the letter ... you're welcome. 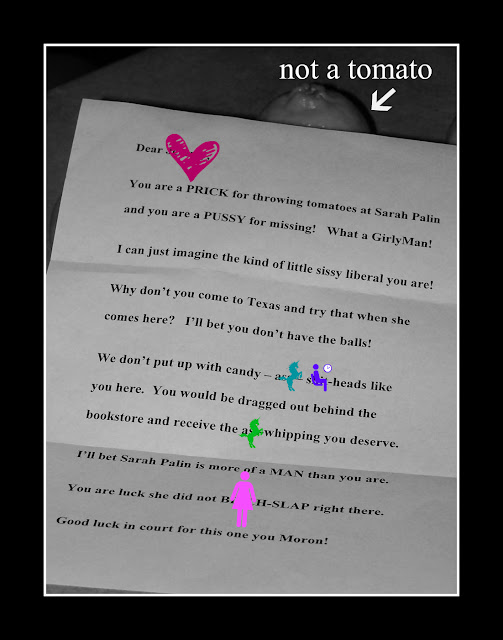 
You are a PRICK for throwing tomatoes at Sar.ah Pal.in and you are a PUSSY for missing!  What a GirlyMan!


I can just imagine the kind of little sissy liberal you are!


Why don't you come to Texas and try that when she comes here?  I'll bet you don't have the balls!


We don't put up with candy - a$$ - sh!*-heads like you here.  You would be dragged out behind the bookstore and receive the a$$-whipping you deserve.


I'll bet Sar.ah Pal.in is more of a MAN than you are.

oh my goodness ... do you know how hard it is to type that many grammatical errors and illogical capitalizations?

and ultimately ... i'm not gonna go all political on you ... because really?  is there anything else i can say?
Posted by jen at 10:09 PM

That is the funniest thing I've seen in a long time! I love you protected our virgin eyes too! Thanks for sharing!

Kinda makes me want to get hate mail.

Nobody ever sends me hate me.

OMG! My fave part is "You are luck..." wow, they must be awesome in real life *giggle*. Sorry that your hubby got the weird letter and hope that you all have a lovely, calm and crazy-free holiday!

My favorite part was that they typed it up, but forgot to actually read the darn thing... 'You are luck'... hee-hee.

Wow, hilarious! Well, not that they have your home address. Dude, that sucks. But I woulda thrown a tomato had I been there.

I think it is great (in a "you should be slightly scared) kind of way. The Sarah Palin part was my favorite!